Your house is probably the most expensive purchase that we make. Externally, they seem solid, unmoving, timeless, yet like all things, they age. They need painting, pointing, windows and gutters cleaning, roof repairs. We put these off for as long as we can, but eventually, something has to be done.

So it was with my house, it was built for a wealthy man in the mid 1920’s. He created a house that is of its time, a traditional house that people look at as they walk past. The mullioned windows all had a pictorial design fashioned as a leaded window, set as three panels, or where that wasn’t possible, as a complementary design. The front door also contained this design, as did a large picture window. It creates a nice light interior in all the rooms.

Everybody who saw it, admired it.

We had already had three new windows installed on the side that takes most of the weather, two of those, despite being just over twenty years old, were rotten, and becoming dangerous. This despite being protected by paint.

In all, I needed at least 5 new windows, and two doors making. This would have meant spending several thousand pounds on the bespoke joinery and the work needed to install then, utilising the old leaded windows where necessary. Then, to complete the protection I would have needed the entire house repainting, which also needs the house to be scaffolded for safety reasons.

Total cost? Well, my calculations worked out at something around £8,000 minimum, with the actual figure probably being a lot higher. Also I took into consideration the fact that I still hadn’t removed my maintenance bills, it would still require painting.

It was a hard decision to make, as I like wood, but the time had come to change to a more long-lasting material. This would also allow for the fitting of double-glazing, My choices were PVC or aluminium for the frames.

I looked long and hard at aluminium, the frames looked too modern for my taste.  That removed that material, leaving just PVC as a viable material.

Here, the thickness of the frames gave the material a more traditional appearance, suiting the house.  But could my windows be re-created? That was the real question.  I started my quest at the back end of 2013, knowing that I would actually want the work doing in the summer of 2014.

I contacted several companies, at least three of which are national. Two
responded, but neither would recreate the designs in my house. One gave me a quote, very carefully costed, which came to more than 10% of the value of my house. The other gave me a quote on a sheet of headed notepaper, as a hand-written guess.  Neither got the business. As to the third? If they cannot be bothered to respond to a request lest on their website, I can’t be bothered to go further with them.

That left me with local companies. Most said that they could match the designs in my windows, but then offered me a book of standard designs. If I had wanted a standard look, then I would have done this years ago. I wanted my design.

I knew I would have to compromise. The existing windows, as two or three panel designs couldn’t be recreated in PVC, it would leave the frame looking heavy with too little glass. The rooms would have been dark, removing one of the nicer features of the house. Out went the idea of three top panes, to be replaced by just one pane. The three lower panes were replaced by two, with one opening window. The bay windows were replaced with a like-for-like excepting that there were now no top-opening windows as there had been before, but two of the main
windows opened.

Downstairs, we opted to have the mullioned French-window bay created as one large window in each side, rather than two. The doors were modified, and a fixed window installed above them. The front door was another compromise. The original was so non-standard by being both wider and taller than a standard door, that I knew it couldn’t be matched. The window also was too wide for a modern door.

I knew what I wanted, what I felt the house needed to maintain as much of the character as was possible. But what of the coloured windows? Could I get those recreated to match the existing designs?

I did consider encapsulation of the existing coloured windows, heard nothing further from the company I asked to quote for that service. Of the others, only two would match the designs in my house.

We settled on Faroncrown, because Wayne Eadsforth took the time to listen to us. He offered advice about what we wanted, and agreed that he could match what we wanted. A final quote was received and we shook hands on the deal. A deposit was paid and the work commenced. Final measurements were taken, angles taken for bay windows, photographs taken, tracings made, colours for the window designs
agreed along with all the other fiddly details.

Work commenced as soon as they had sufficient windows completed, leaving sufficient time for the rest to be finished. They started at the top and worked down from there, i have to admit that I wasn’t too popular as the poor workmen had to trudge up and down the staircases carrying wood and glass. They were kept supplied with cups of tea, (beware, you WILL need to stock up on tea bags) as they worked, completing three windows on the first day. This was one of the slower days, as they were also waiting for the skip to arrive.

The work progressed quickly once they started, the sections of wood from the old windows took more work to remove than they had anticipated but once they worked out how they had been fitted they did speed up. Every night, they cleaned up and vacuumed the floor, removing as much as they could.

Soon, the final window was to be fitted. The frame was installed, and the large picture window was put in place. The match to the original design was remarkable, that was where the care taken with the tracings came in. These allowed the original design to be recreated as one large panel, rather than six smaller ones.

Now the windows have all been installed, I have the satisfaction of knowing that as far as was possible, the existing windows were recreated with sensible modifications being made. The colour scheme has been unified, and the house is now more secure. The only window that could not be matched exactly was the front door, and this has as much of the original design as could reasonably be used in the space available.

I’m happy with the end result. From the outside, the house looks almost as it did, and you would need photographs to be able to find the changes. From the inside, the light, airy feel of the house has been retained.

Thank you, Faroncrown, for supplying and fitting these windows. I would recommend them for the supply and fitting of double glazing.

A last word. One piece of advice I would offer to a prospective purchaser of new windows. If, like me, you dislike cleaning windows, consider having self-cleaning glass on windows that you can’t reach easily. These only require washing with clean water. The ground floor, well, those are easier to do, so save money and have normal glass. Because I have the self-cleaning glass above the ground-floor, and normal glass at ground level I no longer need a window-cleaner. I also have less maintenance outside. A win-win for me! 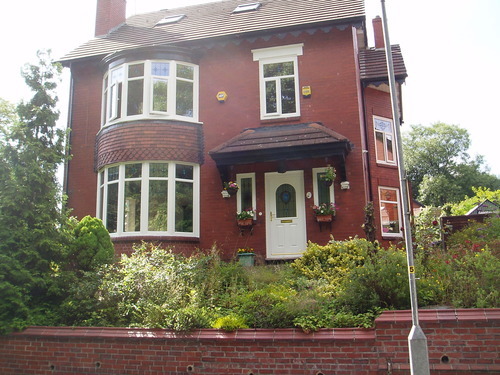 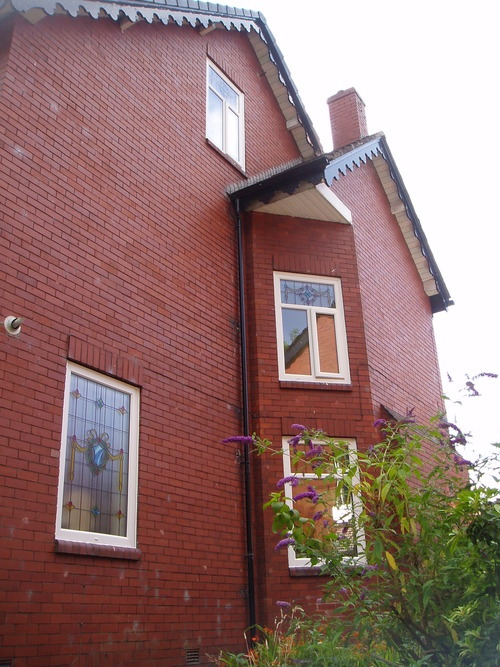 get a FREE quote